“Capitalism will always be racist and sexist, because it has to mystify its core contradiction - the promise of prosperity vs the reality of widespread poverty - by denigrating the 'nature' of those it exploits: colonial subjects, women and the dispossessed."

# Permanent link to Capitalism will always be sexist and racist…

The Mail on Sunday’s Best Shot?

I am not a reader of the Daily Mail or the Mail on Sunday, but Twitter drew my attention to an article in the latter “newspaper” with the headline “Man of the people? New Labour leader Sir Keir owns land worth up to £10m”.

On November 2 2006 I wrote a blog post entitled "Where Have All The Heroes Gone?". It followed a visit to Paris, during which we had visited the Hotel des Invalides.

I noted that the dome of the Eglise du Dome took over 20 years to build and houses the tomb of Napoleon, whose remains are encased in 5 coffins and a sarcophagus of red porphyry. The remains of some other state heroes are also located there, including Ferdinand Foch.

My point in 2006 was that I couldn't think of a single politician or military leader in the World then that would be so revered by the general public that they would support a memorial on this scale. The question is "Eleven years down the line, has anything changed?".

From Russia with Love 7 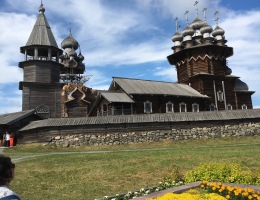 Read more From Russia with Love 7

From Russia with Love 5

Date: 12 July 2017 Location: Viking Akun on the River Volga on the way to Yaroslavl We are due to arrive at the city of Yaroslavl around 08.00, but I am awake at 04.00 thinking about Brexit! One of the things about cruising is that you are more or less forced to talk to people…

Read more From Russia with Love 5

"There is a tragic flaw in our precious Constitution, and I don't know what can be done to fix it. This is it: Only nut cases want to be president." Kurt Vonnegut, "Cold Turkey", In These Times, May 10, 2004.

# Permanent link to US Constitutional Flaw

A staggering statistic of inequality:The 8 richest people in the world have the same wealth as the poorest 50%.pic.twitter.com/0sgIZLF4aP — James Melville (@JamesMelville) June 30, 2017

Why is the British Press so Pro-Brexit?

I think there is little doubt that many British newspapers, particularly the tabloids, had a significant effect on the EU Referendum vote. It has always been a mystery to me why papers like the Sun and the Daily Mail are so obviously pro-Brexit. 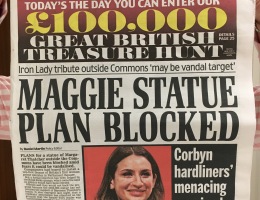 Read more Why is the British Press so Pro-Brexit?

“Once a government is committed to the principle of silencing the voice of opposition, it has only one way to go, and that is down the path of increasingly repressive measures, until it becomes a source of terror to all its citizens and creates a country where everyone lives in fear." Harry S Truman.

# Permanent link to Silencing the Voice of Opposition

Theresa May and the Holy Grail

This is Theresa May and The Holy Grail. Nothing short of genius. #ToriesOut pic.twitter.com/XpWiOaVh2t — Rachael (@Rachael_Swindon) June 25, 2017

Read more Theresa May and the Holy Grail