Our first day in Moscow. The weather was very overcast: cold, wet and generally miserable! We had a very pleasant breakfast on the boat followed by the compulsory safety drill at 10.00. We got a chance to look silly wearing bright orange life jackets. We chatted with the couple in the room across from ours. They come from Texas and lived in London for a while. The lady, whose name we never ascertained, said she would love to retire to Scotland, as she much preferred it to England. She said it would never happen, though.

We decided to go for a walk along the waterway on which we were moored. We weren’t able to identify it as it was labelled in Russian on maps.me! We got pretty soaked before lunch, but we did manage to chalk up about 4000 steps. We have found that our walking can be quite limited on cruises. We had a nice restrained salad for lunch.

After lunch boarded a bus in the pouring rain to go to Arbat Street. Features of the street include the Pushkin Memorial Apartment, which we didn’t go into. It has some interesting statues, which we photographed when the weather permitted. We were left there for an hour by the guide, and to be honest we weren’t that impressed—although the weather definitely didn’t help! Finally, went into a Starbucks, primarily to “use the facilities”. 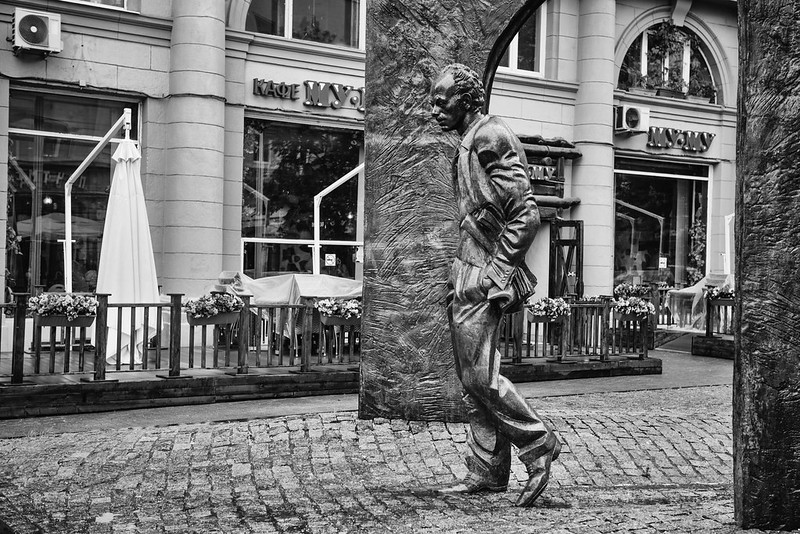 From there we went in the bus to join the queue to get into the Kremlin. The rain continued and made queueing even less enjoyable than it might have been! The visit here was really brilliant, partly due to our very knowledgeable elderly guide Dina. We visited the Cathedral of the Archangel Michael and the Cathedral of the Assumption aka the Cathedral of the Dormition. Both these churches were totally amazing with fabulous icons and wall-to-wall frescoes. The second church mentioned had thrones for the Tsar, his wife and the head of the church, who were the only members of the congregation allowed to sit! Unfortunately they don’t allow photography in the Kremlin cathedrals.

Finally went to the University Area to see a concert by Moscow’s Russian Folk Music Orchestra. This was a fantastic performance that lasted just over an hour. They can be seen on this YouTube video filmed by somebody else.