Today we went on a bus from our hotel in Amsterdam to Kinderdijk, which is an UNESCO World Heritage Site. It is a village in an area of polder which has 19 windmills involved in the maintenance of the land, which would otherwise be flooded as it is below sea level. In fact, most of the maintenance is now done by a diesel and an electric pumping station, but the windmills are kept in full working order partly to preserve the World Heritage status, but also to help out the two main pumping stations in extreme circumstances. We were shown round the site and saw inside one of the windmills. The millers still occupy them, and the accommodation is incredibly cramped by modern standards.

Today we were due to start another river cruise with Viking across Europe from Amsterdam and ending in Budapest in Hungary. Two days ago we received an email from the company telling us that due to low water levels we would not be able to join the ship in Amsterdam. We were to stay in a hotel there instead and make the journey by bus on Monday to Kinderdijk, our next destination. We were given the impression that we would then journey to Cologne in Germany (our third stop) by bus and join the ship there. 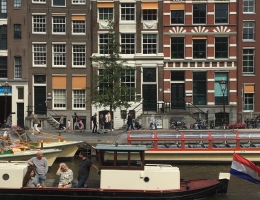